“Until death do us part.”

Most of us have uttered those words, or some version of them, in various wedding rites and, as we did so, we probably gave little thought to the enormity of commitment which they embodied, i.e., to live with somebody forever, as in FOREVER.

It was fifty years ago this past Wednesday, June 14, 2017, that Donna and I made that pledge to each other.  It was a milestone which prompted me to question how we have been able to endure.  Many of our peers have long moved on to a second or third solemn swearing of, ‘Until death do us part.’   How is it that we, or any other couple for that matter, have endured for the long haul? 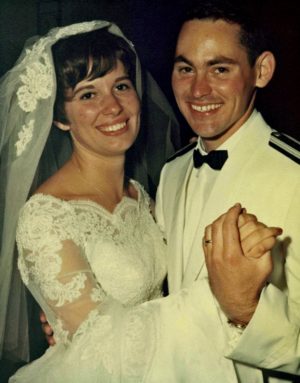 Pause for two glasses of wine, as I ponder the answer.

Nope.  Not enough.  Another glass.

Ahhh…I see us clearly now, Donna and myself.  It’s June 14, 1967, just one week after graduating from West Point.  We’re standing at the altar in the Kirtland Air Force Base Chapel in a Catholic wedding officiated by Father Tiblier.  As an aside, Fr. Tibbs was the agent who surreptitiously setup Donna in a Catholic home for unwed mothers to give birth to (and surrender for adoption) a baby conceived in a high school dalliance.  I knew all about it before I proposed to Donna, so it was no dark secret that might come between us in following years.

But back to the image…I’m attired in my Air Force formal uniform.  Donna is in her wedding dress.  (Both of our daughters would later marry wearing the same dress.)  Now, let’s zoom in closer.  Closer yet.  No, keep going….into Donna’s brain.  What are those words in her thought bubble?  They are what every bride thinks at this moment, ‘It’s MY day.  It’s what I’ve dreamed about my entire life. Everything is perfect. Mike looks so good in that uniform.  My dress is fabulous.’

But there is more text in that bubble.  Focus closer.  Now, we can read her words, ‘I can finally move out of my parent’s house!  I can have a life!’

Donna came from a traditional Italian family.  Italian daughters did not leave their parents until they were married.  She had a huge motivation to shout, ‘Until death do us part!’  Those words meant nothing less than her adult freedom.

Now, let’s shift that mind-reading machine to my brain.  What was I thinking?  We don’t need any magnification here.  The words are supernova bright, ‘I can’t wait to get into bed with her!’

For me, the word ‘love’ was synonymous with ‘sex’.  I was the man author Harlan Ellison had in mind when he wrote, ‘Love is sex misspelled.’

I was raised Catholic…twelve years in Catholic schools, saying the rosary as a family every night, never missing Mass, going to confession.   (I set the Catholic World-record for the sin of ‘impure thoughts.’)  But most relevant to this blog is that I was taught to believe sex could only happen within marriage.  Since my blood was choked with the hormones of a twenty-one-year-old man, I was more than ready to shout, ‘Until death do us part!’  For me, that translated to, ‘Until death do I stop getting laid!’ With my Catholic brainwashing, how could it be otherwise?

So, there you have it…the foundation upon which the Mike and Donna Mullane marriage was built.  For Donna it was freedom to live apart from her parents.  For me it was unrestricted sex.

Oh yeah, that’s a great foundation for an enduring marriage.

But, miraculously, it has.  And the odometer is still rolling upward.  How? Why?

Though we didn’t realize it at the time, we did have some very big things going for us.  Thanks to centuries of Catholic imperialism, Donna and I shared a common religious culture and its values.  Italy and Ireland, the countries from which our roots respectively grew, had long been thoroughly infused with Catholicism.  Through our parents, we were heirs to that culture.

Furthermore, we had the example of our parents.  Their marriages had endured. As I said, we couldn’t see, much less appreciate, the significance of this bedrock of shared culture and parental example for our marriage.  In retrospect, those went a long way toward our marital longevity.

And I can now see other components of a solid foundation.  Catholicism made it easy to discuss having children, i.e, there was nothing to discuss.  You just had them.  By age twenty-five we had three of them.  Likewise, Catholicism made the conversation on marital role-division very brief.  Wives stayed home and raised the kids.  Husbands went to work.  End of that discussion. 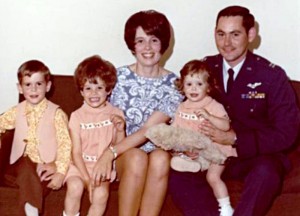 Also, we were both remarkably sterile in vices.  We were probably the only two people from the 60’s who had never used illegal drugs.   Gambling? Alcoholism? Smoking? Out of control spending? Slobs?  Nope.  Nope. Nope. Nope. And nope.  (Although, how I avoided alcoholism will remain a mystery to me.  Between missions in Vietnam, that’s all we did…drink.)

So, with 20-20 hindsight, I can see we did have a lot upon which to build a lasting marriage.

But that’s not to say there weren’t some significant corrosive forces at work which could have easily ended it all.   Most significantly was that Donna and I had dramatically different personalities.  I was analytical, logical, and a type-A.  I had a wicked sense of humor and, thanks to Vietnam, a rather colorful vocabulary.  I was an adventurer and a guy who interpreted rules rather loosely.  I was a risk-taker…even to the extent of having fought a bull in Spain…with a cape!  (An excess of sangria might have been involved in that crazy stunt.)  I was curious, a goal-setter, a multi-tasker, and a permissive ‘softie’ when it came to the children.

Donna was the ‘NOT’ of all of these characteristics.  We had nothing in common, when it came to our personalities.  And I mean NOTHING.  Donna yearned for a stress-free, rooted life.  For the first twenty-three years of our marriage, she never had a minute of such a life.  Only after I retired from NASA in 1990 did she get modest relief, though it was in that retirement I started disappearing into the mountain wilderness to climb various sky-scraping peaks.  I teased her that she should have married an Actuary…a play on an article I once read comparing the stress levels of various jobs.  Actuaries were listed as having the least stressful jobs in America.

It would seem that such extreme personality differences would quickly destroy a marriage.  But, they didn’t. Why?  Because, by some process, which I am at an absolute loss to understand, we learned to accept each other as we were, rather than trying to re-make the other person in our image.  In this regard Donna had much more rebranding to do than I did.  She was grossly ill-suited for the extreme stress that was part and parcel to my USAF flying and NASA astronaut careers.  Before age twenty-five she was writing sympathy cards to newly-minted widows whose husbands had died in combat or training crashes.  Not long after our wedding one of our groomsmen was KIA in Vietnam.  The widow of a pilot friend (also KIA in Vietnam) came to visit us a few weeks before I was to leave on my own war tour.  In many ways, Donna’s married life was a torture.  But she accepted it.  It had to have been an enormous exercise in sacrifice to do so.   But she did.

While my sacrifices can’t compare, they were there.  I wanted to share the thrill of my hiking with her, of seeing pristine lakes and streams and night skies aglow with stars.  It was not to be.  As an avid dancer in her early youth, she had ruined her knees.  I wanted more foreign travel.  I wanted to scuba-dive and ski and sail with her.  But she wanted none of these things.  Marriages have been destroyed by less, but I modified my expectations of adventure to accommodate her, as she modified her wants and needs to accommodate me.  By far, it was the most difficult thing that each of us had to learn and there were some very rough spots as we did so.  If either of us had failed in our efforts, I’ve no doubt our marriage would have ended.

So, what is the formula to ensure a long marriage?

I don’t believe there is one.  We humans are so infinitely variable what works for one couple might not work for another.  For Donna and me, the formula was a mixture of shared culture and values, parental example and a remarkable ability to adapt to each other as we changed through the years.   Will that work for others?  Who knows? 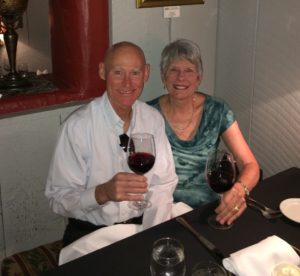 Marriage isn’t easy.  You never get a day off.  It’s always a work in progress.  But I’m growing more and more confident that Donna and I have adapted to each other so thoroughly that our marriage will only end when death does separate us.

Good luck to all those who have dared to say those words, ‘Until death do us part.’ You have your work cut out for yourself.  But, as Donna and I have done, you’ll find great joy in your labors.

For more of my life story, checkout my memoir, Riding Rockets, The Outrageous Tales of a Space Shuttle Astronaut.  Autographed copies are available on my website store, www.MikeMullane.com, or through Amazon.