Several years ago, after my annual NASA physical exam, the doctor gave me a very definitive number on my risk of staying alive for the next decade, or at least of staying alive in a condition of reasonably good health. Specifically, he said, I have an 8.2 percent risk of suffering a major cardiac event (as in stroke or heart attack) sometime in the next 10 years. He had arrived at that figure after a computer had number-crunched my risk factors, i.e., lipid measurements, age, gender, race, and family history. The latter is bad. My paternal grandfather died at age 65; my father at age 66. Believe me, it’s scary when you find yourself as a patriarchal record setter at age 67. The doc gave me this news with some gravitas, which he must have quickly sensed, for then he breezily added, “Or, another way we can look at this data is to say you have a 91.8 percent chance of NOT having a major cardiac event in the next decade.” Wow! That sounds a lot better! 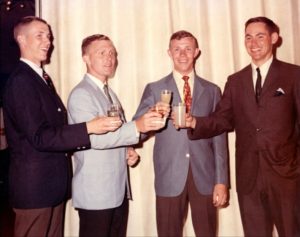 As I walked form the office, I considered the number. I won’t lie. It bothered me. It particularly bothered me since I had recently returned from the Mayo Clinic after having visited my former West Point roommate (and best man at my wedding) in his last days of life. That was quickly followed by news of the death of another of my classmate groomsmen. In my wedding album is a photo (posted here) of four of us West Pointers with upraised glasses in a wedding toast. Our smiles are incandescent; our hair, though cut military-short, is still solidly rooted in place; our faces unlined; our eyes bright and clear. It is a photo which thoroughly captures the ruddy good health of the young. Now, I’m the sole survivor of that group, the other groomsman depicted, Mike Parr, having been KIA in Vietnam not long after the photo was taken. It’s photos like this that slap you awake to the limited sand remaining in your hourglass of life.

Then, an ironic laugh came to me. At age 32, as I was being announced as a newly selected astronaut, if somebody had whispered to me that I had just entered a profession which had an 8.2 percent chance of killing me, it wouldn’t have bothered me in the least. Seriously, I wouldn’t have given it a second thought. I always assumed the chances of death by shuttle were MUCH higher.

As it turned out, the chances for the TFNG Mission Specialists (my title) were exactly 15 percent. There were twenty of us with that MS title and three of that group died on Challenger (Judy Resnik, Ellison Onizuka and Ron McNair). Actually, it was a 14.3 percent risk for the fourteen male MSs (two of 14 males perished). At first glance, you would think the odds for the six female TFNGs would have been one in six or 16.7 percent which happens to be the exact odds of dying while playing Russian roulette with a six shot revolver. But actually, there were only five TFNG women who could have been selected for the mission. Sally Ride would never have been in the running. NASA would not have wanted the press focusing on any woman other than school teacher Christa McAuliffe and Sally’s celebrity would have dimmed Christa’s spotlight. So, Sally most certainly was never considered for that flight, leaving a pool of only five TFNG women from which to select a companion for Christa. So the odds for a female TFNG to have been on the fateful mission were one in five or 20 percent. Judy Resnik was the casualty in that roulette of fate. 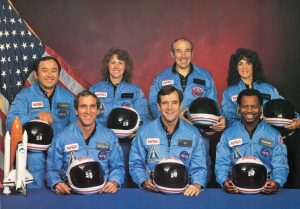 I can’t speak for others, but I can unequivocally say, “No!” for myself. It would not have mattered. That’s not to suggest I was fearless on my three missions. Quite the contrary. As I watched those stick-figures on the countdown clock doing their digital dance into single digits, I was beyond fearful. I was terrified. Yet, I could no more have walked away from a shuttle mission than a migratory animal can ignore the turn of the seasons. That’s probably the best explanation as to why there’s such an extreme difference in how I reacted to the 8.2 percent risk number the doc gave me, versus the higher risk of being a TFNG astronaut. While the finality of death is the same, be it result of the shuttle or a bacon cheeseburger, I was doing what I HAD to do when I strapped into the shuttle. I didn’t have a choice.

I have often explained this ability to accept the extreme risk of a shuttle mission by using the Mt. Everest climbers as an analog. In their treks, I imagine them confronting the memorials to preceding climbers who have perished during their climbs and experiencing the fearful image of themselves buried under the next pile of ice covered rock. But still, they press on. Why? For the same reason I could have never turned away from a shuttle mission. There is a fear in those climbers’ souls that is far greater than fear of death. It’s the fear of not reaching the top of that mountain. For astronauts the “top of the mountain” is a thundering shuttle ride into earth orbit. NOT making that trip was more fearful than the extreme fear of dying in the attempt. I suspect most astronauts are driven by the same reason. For us, the need to make the mission is an instinct as primordial as taking a breath. There’s no OFF switch for this need. 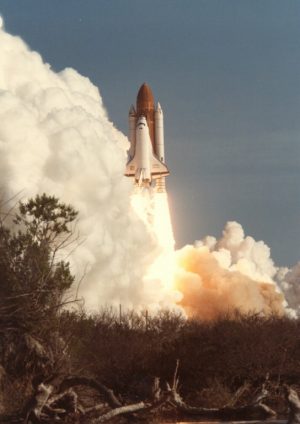 No, I can’t imagine any risk number, whispered into my ear at my astronaut christening, which would have deterred me from continuing my NASA career.

So, why the worry at the 8.2 percent number? I think it’s the brutal awareness of mortality that comes with age. If forewarned in my teen youth that a steady diet of hamburgers, French fries and chocolate shakes would put me at an 8.2 percent risk of a “major cardiac event” in my seventh decade of life, could I have walked away from those cholesterol bullets? Not a chance. No teen can comprehend the word mortal. “I’ll never be old”, is their belief system. How about later in life, say at age 40, would the warning of an 8.2 percent risk of a major cardiac event motivated me to set aside the beer and pizza? Again, not a chance. At that age I was an active astronaut facing what I considered (and what proved to be) a greater risk to my life. You might as well have told a GI in a landing craft, racing to the shores of Normandy, that the cigarette he was smoking would ultimately be a serious risk to his life and expect to see him flip it overboard. Nope. Not going to happen. In my active astronaut career, after hearing the doc’s 8.2 percent number, I would have stopped at the vending machine for a Ding Dong on my way back to my office.

No, it could only be that getting the news in my autumn (winter?) years of life, where I no longer had an umbrella of greater risk to hide under, that the 8.2 percent could scare me. And it did. But I grasped at the straw…I can do something about this risk! After all, it wasn’t like the space shuttle. I didn’t have a primal instinct to eat donuts. I can walk away from those and the hamburgers and the ice cream. Sure, I can.

Damn! Those airport Cinnabons sure smell good. I should ask if they have any with statin sprinkles on top.