And we were trying different things
We were smoking funny things
Making love out by the lake to our favorite song
Sipping whiskey out the bottle, not thinking ’bout tomorrow
Singing Sweet home Alabama all summer long….  ‘All Summer Long’ by Kid Rock

It’s a great song.  But I always experience a pang of regret, when I hear the lyrics….not thinking ‘bout tomorrow. I wistfully imagine how delicious such a moment would be…an utterly-selfish immersion in only the present, with not a care about what tomorrow might bring.

In my entire adult life, I can’t recall ever having such a moment.  Certainly, it never occurred in my four years at West Point.  There, the responsibilities of tomorrow loomed like the maw of a T-Rex.  And they didn’t end at graduation.  Of course, I thought they did.  With one hand clutching a diploma and the other swinging my cadet wheel-hat high into the sky, I could only see an infinite series of carefree sunrises and sunsets awaiting me.
I was free!  Free!  FREE, from thinking ‘bout tomorrow!!!  And it tasted oh, so sweet.  Though I didn’t yet know it, that freedom would end exactly one week later, when I said to the love of my life, “I do,” and slipped the ring on her finger.  I had assumed all the responsibilities of a husband.  Still, I was blind to what that really meant.  Life was glorious and it would remain that way forever.  A passage from my memoir, Riding Rockets, says it all, 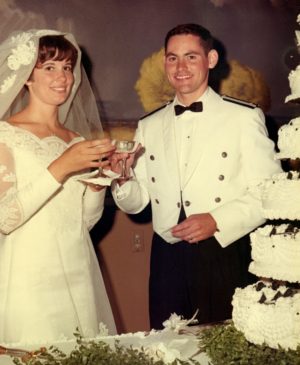 A small cinder-block house on Mather AFB in Sacramento, California, was our first home.  While we waited for our few possessions to catch up, we enjoyed Uncle Sam’s furniture.  We sat on metal folding chairs and ate our meals off a card table and made love on a one-man canvas cot.  It was the richest we’ve ever been. We had each other and that was all we needed.

How sweet.  How quaint.  How naive! Even during that romantic love-making, Donna was already well advanced in her pregnancy.  Nine months after our nuptials, she delivered a set of boy-girl twins and any hope of ever experiencing a moment of not thinking ‘bout tomorrow was obliterated with thermonuclear thoroughness. At age twenty-two I had three lives that depended upon how well I prepared for the remaining tomorrows of my life. 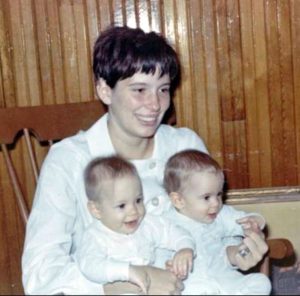 (Three years later, another daughter would make it four lives.) There would never be a day off.  What about when the kids were finally on their own, you ask?  Trust me.  There’s NEVER a time at which you will think, “Mabel, the kids are finally gone.  For the rest of our days, we can relax and watch the purple unicorns dance among the rainbows.”  BS! Even when the children fly the nest, you will continue to worry about their tomorrows.  Is their marriage going to endure?  Are they saving enough? Will their jobs be secure?  Do they have enough life insurance?  Health insurance?  Will their health remain good?  Will they ever give us grandchildren?

Then, when they do give you those grandkids, you get slammed with another generational wave of tomorrows to worry about.  Are the kids saving enough for their children’s education?  What if they lose their job? What if they come back to live with us!?  The kids aren’t raising their children right!  Oh my God, the grand-kids are driving?  Are they safe?  Dating, already?  I don’t want to think about it.  Are they making good choices?

It’s a strange feeling.  If asked, I wouldn’t change anything about my life; certainly, not my decisions to marry early and immediately have children.  My wife, children and grandchildren (six) have brought me immense happiness.  I can’t imagine a life without them.  Nevertheless, it is a teasing fantasy to imagine enjoying a moment of adulthood in which I could be free of all responsibility and the associated need to think, plan and worry about tomorrow.

My three children experienced it.  None of them married early (and marriage, as we all know, is typically our first acquisition of huge responsibility). They all had a chapter in their early adult lives, where they could sip whisky out the bottle (or do other things I don’t want to know about) and not think about tomorrow. I vividly recall the moment in my son’s life, when he drove away from our Albuquerque home to his first Air Force duty station.  I said to Donna, “Can you imagine being that free?  His entire life is in the trunk of the car.”  In the silence that followed, I know she was enjoying that vision, as much as me.  Then, we turned back to our house and walked inside to pay bills. Like it or not, our tomorrows loomed.

Paradoxically, the moment in my life where I was most free of the responsibilities of husband and father, was at age twenty-four, during my 1969 tour in Vietnam. There, my world contracted into a single purpose…plan, execute, debrief missions, repeat. There were no bills to pay, snotty noses to wipe, diapers to change, compromises to make, arguments to settle, pediatrician appointments to deal with.  If I had been kidnapped by aliens, I could not have been more removed from those domestic responsibilities.  There was no emailing or skyping or calling.  I was free.  Of course, Donna paid a huge price for that ‘freedom’.  You can bet she was thinking about tomorrow, with the foremost thought being, What happens if he doesn’t come home?  How will I raise these twins? 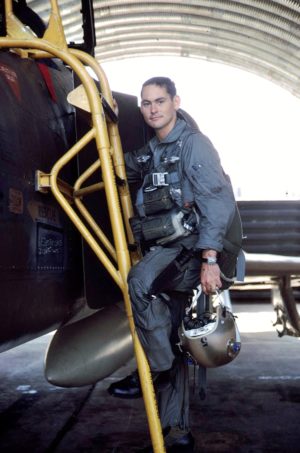 But the freedom from life’s responsibilities that comes with being immersed in war, obviously isn’t freedom at all.  It’s certainly not what I’m talking about in this blog.  No. Freedom is what the college coed is living, as she tours Europe on a bike or the young man experiences while crewing a sailboat to the South Pacific.

So, what’s the lesson of these musings?  Just this…and it’s for all you driven, goal-focused, young men and women reading this.  In other words, it’s for all the Mike Mullanes out there (including some of my grandchildren).  Your unfettered youth is perishable.  Certainly, your education should be the number one priority in your lives, for nothing will serve you better in the future.  But, while completing that education, take a brief moment to savor the freedom of young adulthood.  It doesn’t have to be the European bike tour or sailing experience.  There are plenty of other (and less expensive) ways to indulge yourself in that sweet garden of no responsibilities…paint a landscape, run a marathon, climb a mountain, do some greeting-card ‘crafting’ (Donna’s escape), learn fly-fishing, read a dozen books, write a book, take a photography lesson or do any of the other things your selfish inner-spirit craves. Soon enough, you’ll be a clone of my wife or me watching your son or daughter drive away with their entire life in the trunk of the car and wistfully dreaming, I wonder what that feels like…to not be thinking ‘bout tomorrow? 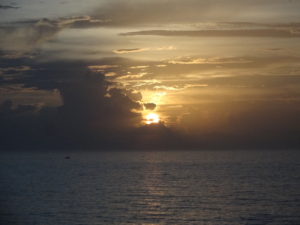 GODSPEED TO ALL OF YOU ON YOUR LIFE JOURNEYS.   MIKE