40th Anniversary of the Astronaut Class of 1978…the TFNGs

by R. Mike Mullane (NASA Astronaut, Ret.) copyright 2018 all rights reserved. Author of Riding Rockets, The outrageous tales of a space shuttle astronaut.  Autographed copies of Riding Rockets can be ordered from the Online store on this website.

January 16, 2018 will mark a very significant date in my life…the 40th anniversary of my selection as an astronaut.

Four decades ago, I was certain I would be rejected.  During a yearlong period, NASA had reviewed over 8,000 applications.  Eventually, they culled 208 people from that group for interviews and medical exams at the Johnson Space Center.  Ultimately, 35 of that group were selected to the astronaut corps, a number that gave us our class name, Thirty-five New Guys, or TFNGs for short.  A quote from my memoir, Riding Rockets, captures my mental state in the days leading to that selection announcement.

“Like the other 208 people who had gone through the astronaut selection process, I had had an ear tuned to the telephone for several months.  Not that I expected to be picked.  Far from it.  I felt it had been a fluke that I made the interview cut in the first place.  In their more studied deliberations the NASA committee would finally realize what they had in Mike Mullane:  an above-average type of guy; nothing spectacular; a twelve-hundred-and-something SAT guy; a 181st-in-his-West Point-class type of guy; a guy incapable of counting backwards by 7s [one of the psychiatric tests].  There was no way I was going to twice fool an organization that had put men on the moon.  But, like the lottery player who knows he is going to lose, I was still going to check the numbers.”

We were the largest class of astronauts ever selected.  You get a sense of that in the attached photo of the TFNGs being introduced to the world in a Johnson Space Center auditorium. To capture all of us simultaneously the photographer nearly had to stand in San Antonio.  Individuals in the photo are largely unrecognizable.  I’m the guy in the bottom row, third from the left, in the brown suit. Contrast this TFNG class photo to the group photo of the first astronaut class, the Mercury 7 astronauts.  You don’t nee

d a watchmaker’s loupe to recognize these legends.

I’m proud of my TFNG membership, a group that wrote the history of the early Space Shuttle program.   Another quote from my Riding Rockets memoir summarizes that history.

“TFNGs logged nearly a thousand man-days in space and sixteen spacewalks.  Five became veterans of five space missions (Gibson, Hawley, Hoffman, Lucid and Thagard).  The first TFNGs entered space in 1983 aboard STS-7.  Steve Hawley became the last TFNG in space sixteen years later, when he launched on his fifth mission, STS-93, in 1999.  TFNGs were ultimately represented on the crews of fifty different shuttle missions and commanded twenty-eight of those.  It is not an exaggeration to say TFNGs were the astronauts most responsible for taking NASA out of its post-Apollo hiatus and to the threshold of the International Space Station (ISS).”

Indeed, January 16th looms large in the hearts of TFNGs.  And we were not about to let our ‘Ruby’ anniversary pass without collectively celebrating it.  That was done a little early, this past December 14th, with most of the surviving members and spouses of the class, including my wife and I, at a Houston rendezvous.

As it is for all attendees at any class reunion (High School, University, Pilot Training, etc.) we see our age in the changes of others.  I was certainly reminded of mine.  Gravity had replaced the sculptured hardness of our youth with sags and lumps.  Hairlines were in galloping retreat…or missing altogether. Faces were etched with the arroyos of age.  Hearing aids were de rigueur.  Reading glasses were holstered in pockets, ready for a quick draw when the menus came.

We had changed in other ways, too.  No longer were we gripped with the hyper-competition of 40 years past.  Then, we had but a single thought, get into space, a passion which made us see our peers as potential threats to our place in the line into space.  But the lust of ‘mission envy’ had long been satiated.  At this reunion we enjoyed an unfettered comradery.  We all had been blessed to wear that most rare of lapel pins, the gold astronaut pin. 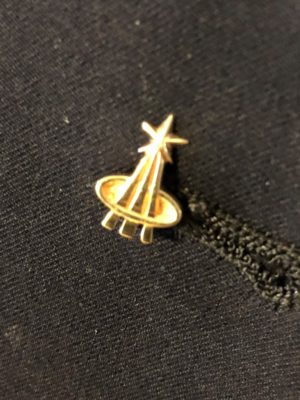 The opening cocktail hour was followed by dinner.  Throughout the event, a looping slide show captured us in our youthful prime.

After adding a few comments on our selection, Rick yielded the microphone to George Abbey.  George was the Director of the Flight Crew Operations Directorate at the Johnson Space Center for most of our time at NASA (he was not an astronaut) and is considered the father of the TFNGs.   We were happy to host him at the reunion.  George chaired the 1977 selection committee, composed of a panel of veteran astronauts.  Theoretically, each committee member had a vote in the final tally, but we TFNGs joked among ourselves that Abbey’s vote was the only one that counted.  In that regard, all of us owe him our astronaut lives.

Now in his 80’s, George delivered the longest speech any of us had ever heard him give…about fifteen minutes in length.  And there was absolutely no hint of his age in that speech.  He could have been 40 years younger. 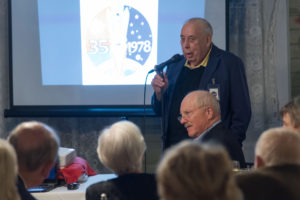 With only brief referrals to notes, his recollections of the halcyon days of our astronaut experience were clear, focused, witty and sometimes poignant.   He finished with a comment on how proud he was of all of us. “If I had to do it all over again, I wouldn’t change any of my selections.”  There were a few smirks in the audience, mine included, at what was likely a ‘stretch’ in his true feelings on that topic.  During our careers some of us, myself included, had problems with George’s leadership style.  Nevertheless, I have never forgotten I owe him for a lifetime dream come true…that golden pin and all it signifies. It was good to see him hale and hearty and I wish him continued robust health and success.

Serendipitously, Donna and I had the good fortune of sharing our dinners with Apollo Astronaut and moon-walker, Alan Bean, and his wife.  Al had been our mentor through the first year of our astronaut experience and was invited by the class to the anniversary party.  He was also the keynote speaker at the all-astronaut reunion dinner the following night. 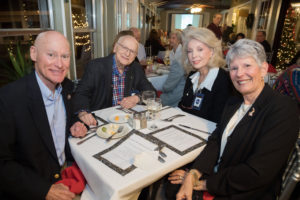 As an astronaut, it can be easy to forget the history you walk among.  Later, I reflected with my wife on the significance of our dinner with Al. Only twelve humans have walked on the moon…and we had dinner with one of them.  I felt immensely privileged, particularly knowing it is highly unlikely any other humans will walk on the moon in the remainder of my life…and, perhaps, decades beyond.

The following night, we attended the all-astronaut reunion and caught up with others from my NASA era.  My STS-36 crew was all present and we posed for a photo.  We made certain to stand in the same line-order as when our official mission photo had been taken, 27 years earlier. 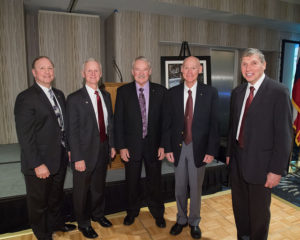 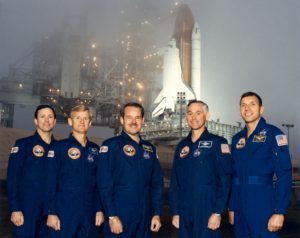 But the most unique image to be captured during the event was a group photo of all the women astronaut attendees.  Among that crowd are three of the four surviving TFNG women…the trailblazers for all the others.  Like I said, as an astronaut, it is easy to forget the history we walk among. 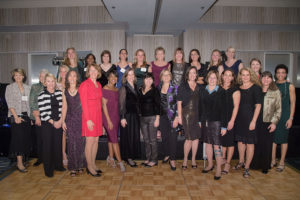 Throughout the evening, I had the opportunity to meet many of the latest class of astronaut…the class of 2017.In them I was hurled back four decades to see myself and my TFNG peers.  In them, was the vitality of youth, of the burning passion to someday ride a thundering machine to horizons far more distant than any ever reached by the TFNGs.  I looked at them with fierce envy.  I wanted to be them, to be young and living the astronaut experience anew.  What amazing things they will do and see.  I wondered, as I shook their hands, if I was meeting the man or woman who will become the first Martian.  I would like to think that.  But wherever their journeys take them, I wish them safe travels and Godspeed.  Ad astra. 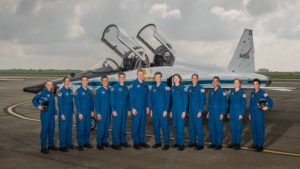 by R. Mike Mullane (NASA Astronaut, Ret.) copyright 2018 all rights reserved. Author of Riding Rockets, The outrageous tales of a space shuttle astronaut.  Autographed copies of Riding Rockets can be ordered from the Online store on this website.

All photos are either courtesy of NASA or the work of the author.